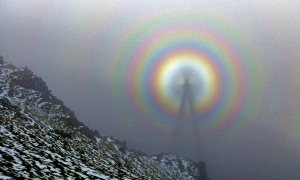 How often does one look at a raincloud and wonder how it came about, how did a delicate mass of water droplets come to suspend itself in the sky like dark grey candy floss? Very rarely. Most of the time we zip up our raincoats, open our umbrellas and curse the heavens for ruining our day.

However, 120 years ago Charles Thomas Rees Wilson, a scientist from the town of Glencorse, just outside Edinburgh, was admiring the beauty of his silhouette caught in the cloud’s coronas and glories (called the Brocken spectre) from the peak of Scotland’s highest mountain, Ben Nevis, and like a lot of men enchanted by the beauty of nature, he felt the need to recreate it. But unlike poets and painters before him, he decided to use the art of science.

There is water hanging in the air all around us, and it is from this invisible water that clouds form. If the amount of water in the air has increased, say through evaporation under the morning Sun, and the air cannot hold any more water, water droplets form around ‘aerosol’ particles, which are often dust and salt particles which act as agents for cloud formation. Another way clouds can form is if the air has cooled to its ‘dew point’ (when condensation occurs) and, again, the surplus water droplets cling to the aerosol particles, forming fog or mist.

But how are these plumes of white water lifted into the sky? This can happen in one of three ways. Newly formed water droplets can remain aloft as long as the pull of gravity is smaller than the drag force on the air (if this balance shifts, the cloud breaks and everyone beneath it gets wet). If these clouds fall into a weather front (a region of new weather enclosed within an air pocket of a different pressure), they are thrust upwards by frontal lift. Another way these clouds are lifted upwards is by catching a ride on the warm winds often touched by sunlight. The third path for clouds is following  a physical barrier upwards, such as a mountain.

And this brought about the clouds that Wilson looked down upon from the observatory on Ben Nevis, watching coloured  haloes that formed around the Sun through mist (‘coronas’) and the rainbow spotlights that follow shadows cast upon clouds (‘glories’, also the explanation behind the Brocken spectre). He began trying to recreate these wisps of watery cotton by expanding and cooling saturated air. It was these trials that led him to discover the importance of aerosol particles in becoming the centre around which the water droplets gather. This led to the construction of his life’s word: the cloud chamber, which went on to become fundamental for the advance of experimental particle physics. His next move was to try zapping his little clouds with the latest vogue of science, newly discovered X rays. To his delight, he found that this greatly increased cloud formation, showing that the aerosol particles were in fact charged ions.

This discovery initiated many more studies to the source of atmospheric electricity, now known to be cosmic rays, and so the legacy of this Edinburgh scientist lies within the advances of particle physics and meteorology. For those interested in finding out more about Wilson’s work and current research on cosmic rays and climate, thunderstorms and the search for the origin of cosmic rays, The Royal Society of Edinburgh will be holding a conference later this week to honour Wilson and his contribution to physics. December 7th, The Royal Society of Edinburgh (RSE), 22-26 George Street, see details on the RSE website.

Originally published in the Student, December 2012. 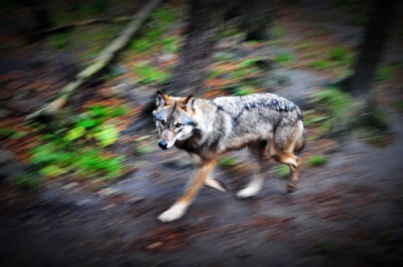